In July 2013, Japan Patent Office published new examination guideline regarding the range of substantial examination beyond the range that satisfies the unity of invention requirement. All the patent application currently pending are to be examined in accordance with this new guideline.
This paper first explains the difference in the basic concept of the unity of invention among Japan, USA and EPO.

Further, it explains the summary of the new guideline as to the range of substantial examination beyond the range that satisfies the unity of invention requirement, followed by the explanation about the countermeasure to be taken in response to the issuance of lack of unity rejection.

2. The difference in the basic concept of the unity of invention among Japan, USA and EPO

The followings are our brief comparison about unity of invention in USA, EPO and Japan

802.01 Meaning of “Independent” and “Distinct” [R-5]
INDEPENDENT
The term “independent” (i.e., **>unrelated<) means that there is no disclosed relationship between the two or more inventions claimed, that is, they are unconnected in design, operation, and effect. For example, a process and an apparatus incapable of being used in practicing the process are independent inventions.
MPEP is not concerned with “technical contribution” of the claimed invention over prior arts. It is only concerned with connection in design, operation, and effect of the claimed inventions.

EPC is concerned with “technical contribution” of the claimed invention over prior arts.

Article 25octies of Regulations under the Patent Act stipulates as follows:

Japanese Patent Act Article 25octies is concerned with “technical contribution” of the claimed invention over prior arts.

At JPO the range that the Examiner examines is limited as explained below, which includes small addition to the range of unity explained above.

3.  A Summary of New Guideline 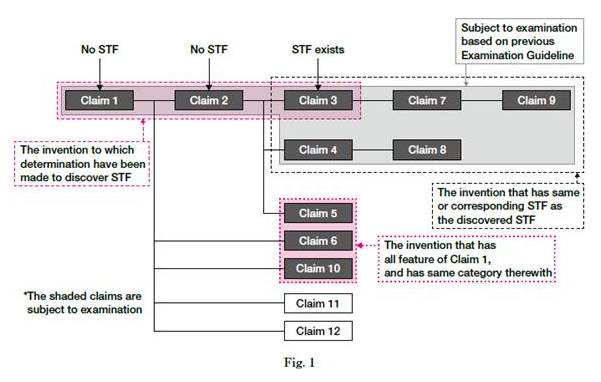 [This (i-add) should be drafted in a manner that already existing claim element (each step or each means) is further limited in scope. Please refer to the following section “4-3” for the meaning of “further limiting the scope of each element”]

-That may include dependent claims that depend on claim (i).

If you add claim (iv) that does not have novelty, it is not further examined, and adding such claims will constitute independent reason for rejection. 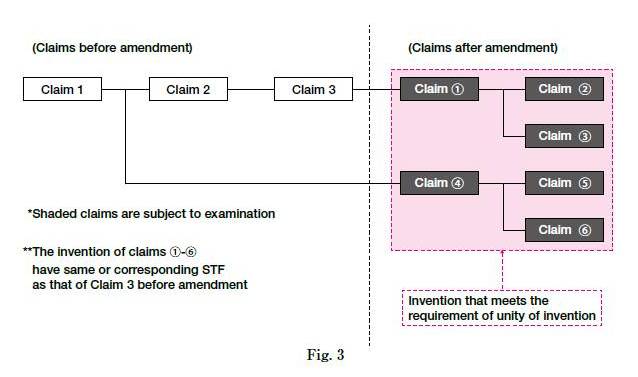 As illustrated in the above drawing, in which previous claim 3 has novelty, we can file amendment to the claims in a manner:

(manner A: corresponding to claims ①,② and ③)
-That has as many independent claims like claim ① above, that has all the limitations of claim 1 through 3, as possible.
-That may include dependent claims that depend on claim ①.

(manner B: corresponding to claims ④,⑤ and ⑥)
-That has as many independent claims like claim ④, which has same or corresponding STF [*d] as that of claim 3 before the amendment
[the explanation of what concretely means “corresponding” has not been expressly published];
-That may include dependent claims that depend on claim ④.

(4-3)  Repercussion for not abiding by the above restrictions

Filing the claim amendment that does not meet the above requirement would trigger final rejection to which freedom of amendment is extremely limited.

We can only either:
(a) Cancel claims,
(b) Further limit the scope of each element (each step or means) of the claims,
(c) Correct typographical error
(d) Rephrase unclear description.

Further limiting the scope of each element of the claims means something like the following:

Only way out for us for the claims that do not meet the above requirements to be substantially examined is to file a divisional application covering such claims.

As illustrated in Fig. 1, range of substantial examination has been somewhat relaxed from the previous Guideline, although still being not comparable with U.S. and European counterpart.
If we are to give you one advice, it is to file claims that have at least novelty over the potential references, if not inventive step, where the element that makes the claims novel being shared by all the claims.

The concept of the unity of invention, the range of substantial examination and allowable range of claim amendment in response to the issuance of lack of unity rejection are quite complicated.

We are more than happy to provide you with additional explanation thereof.