Kodai Kimura
Attorney at Law of the Law Division

Today, I was feeling somewhat tired and needed a break. I decided to go to a Mister Donut outlet, which is a popular donut chain shop in Japan, where I ordered my favorite combination – an old fashioned donut and coffee (free refills!). As I ate the donut, one-half looked like a beautiful arch and made me recall the recent news over the New National Stadium Japan designed by the Zaha Hadid Architects in the UK, led by the famous architect Zaha Hadid.

For the 2020 Tokyo Olympics, an international design competition for the New National Stadium Japan was held in 2012. As a result, Zaha Architects won the competition with a design comprising 2 impressive giant arches called “keel arches,” around 370 meters in length each. 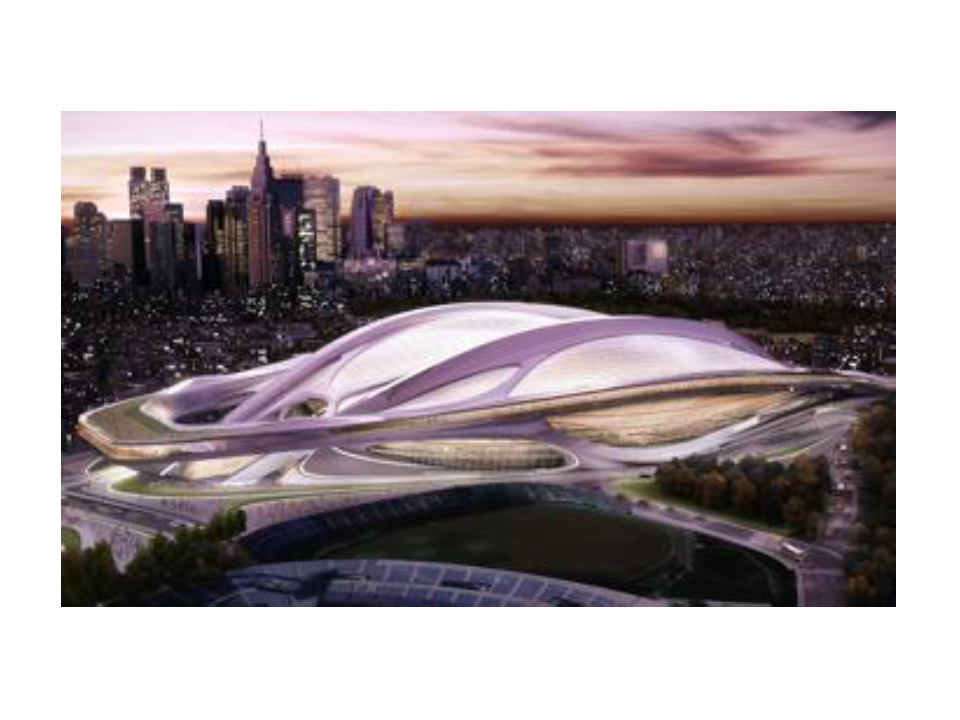 However, this impressive design caused the construction costs to soar significantly. In 2015, construction companies submitted their estimates at around JPY 300 billion, which highly exceeded the initial budget of JPY 130 billion. Also, an authoritative architect group led by Fumihiko Maki asserted that the giant arches should be removed to avoid unreasonable costs for construction because each arch alone was estimated to cost JPY 50 billion. After discussions involving public opinion, the original Zaha Hadid plan was withdrawn by the responsible authority, Japan Sport Council in July 2015.

In December 2015, a plan submitted by a group led by a famous Japanese architect Kengo Kuma was selected as the winner for the new competition. However, the story did not end here. Zaha Hadid pointed out the similarities between her original plan and the new one, especially concerning the layout and seating structure of the stadium.

Figure 2: Design by the Group led by Kengo Kuma

I would like to add some legal analysis from here. Japanese Copyright Law confers a reproduction right to a copyright holder of the work. To constitute copyright infringement, there are two requirements, (a) plaintiff owns a valid copyright of the work, and (b) the alleged infringer actually infringes (such as reproduction, adaptation etc. which amounts to conduct subject to copyright) the protected work .  Unlike the U.S., Copyright Law automatically allows a court to grant injunctive relief if copyright infringement would be found.

For a further breakdown of the requirement (b) in the case of infringement of a reproduction right, plaintiff needs to show that (1) defendant reproduced plaintiff’s work in a tangible form, (2) defendant’s work was created based on plaintiff’s work, and (3) defendant created its work which is identical with the expressive essential features of plaintiff’s work (similarities). In the instant case, a critical issue would be (3) similarities. In Japan, there is no leading court precedent involving similarity of architectural works. However, the general understanding is that originality can exist not only based on the appearance of an architectural work but also on the inside appearance of the work. Therefore, similarities of layout and seating structure of the stadium might be an issue.

Although I am not sure about the detailed information of the structures, from a legal perspective, copyright infringement would not be a small risk that could be easily swallowed. I just hope that this project will not create any additional expense. Needless to say, such expenses are not free of charge.